We stood in a sodden group on the jetty, impatiently waiting for our longtail to come pick us up. Here’s what these boats look like.

They are long and slim, and the local name for them is “Rua Hang Yao. They have a long rod in the back of the boat, which holds up the motor and the propeller, and are extremely noisy, sounding more like dragster racing cars. No wonder the baby in our party, started yelling again as soon as we set off away from Sea Gypsy Village. 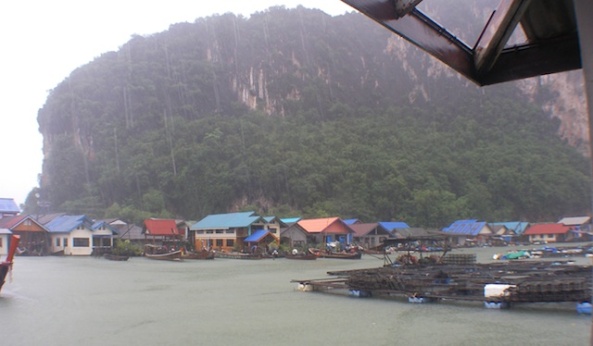 We were all hungry, and soaking wet as we journeyed to view James Bond Island, made famous by the 1974 movie, “The man with the golden gun,” starring Roger Moore as Bond, and Christopher Lee as Scaramanga the world’s most expensive assassin, who charges $1m per hit.

After skirting the tall thin island,

we carried on to the Grotto Cave, and our boat sailed right through it, next to several people canoeing in the pouring rain. 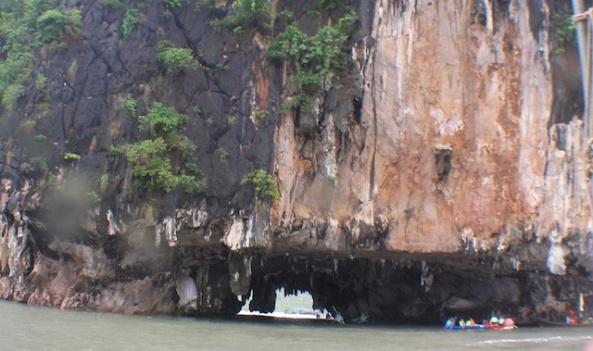 Finally, we met up with our Junk boat again, and clambered aboard. Oh the luxury, in spite of the leaky roof! At last we were reunited with our towels, and could wrap ourselves up in them, as well as dry off our feet. A buffet lunch of fish, chicken, rice and salad was served, together with a couple of bottles of Thai wine. Our guide, knowing that we came from South Africa, apologised for the wine, saying, ” I know it’s not nearly as good as yours,” and he was right about that. 😉

On our return journey, we caught up with the other boat which had left the harbour at the same time as us. They weren’t going anywhere, as they’d completely run out of diesel. It was still a long way back to port, so our crew set about fixing up a tow line, and we started off once more, amidst much hilarity and joking between the two crews.

It was now going to take us much longer to get back with the extra load on, but I suppose we could hardly leave them stranded, could we? 😉 About half an hour later, we noticed something was banging against the side of our boat, and a head popped up over the side. No, it wasn’t pirates; just the other boat’s motor dinghy, with two of its crew and a large plastic container. They were hauled aboard, and up came the floor boards, so that diesel could be syphoned into the empty container, as they needed to be able to maneuver their own way into the harbour. Once they had the required 20 litres, off they went back through the extremely rough waves to their own boat. 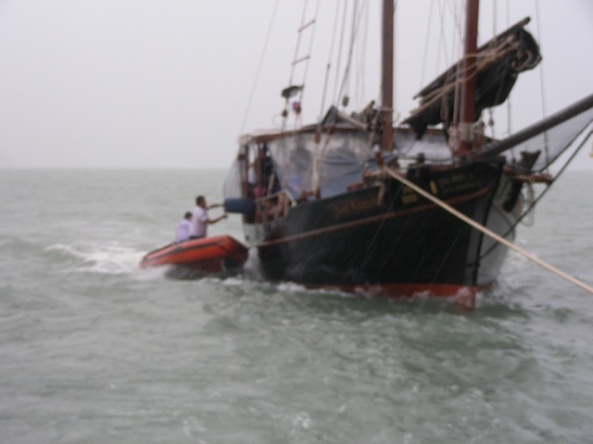 We were all watching this exercise with our fingers crossed, as it was really very tempestuous out there. They made it back on board, but as they were trying to secure the dinghy, the rope slipped out of the one guy’s hands, and off went the little craft, bobbing merrily away through the waves. Once more, our captain came to the rescue, rounding up the dinghy, almost like herding cattle, and pushing it over to the other boat, until a man could jump in and tie it up. It was quite an expert bit of boatmanship, and I was most impressed.

So all’s well that ends well, I suppose. We caught the rush hour traffic, made worse by the pouring rain, on the way back to Club Med, but eventually arrived about an hour late. As we pulled up, some of the young staff came rushing down the the steps to greet us with fresh towels to warm ourselves in, and then ushered us over to the sofas in the foyer, where they had cups of hot chocolate waiting. What a day it had been, and a never to be forgotten trip.

This all happened on Wednesday, and it’s been raining steadily since then, with the exception of a few hours this afternoon. I hope the weekend will bring the sunshine again, not only for me, but for all of you too. Have a great one.

39 comments on “Part two of my Phang-Nga Bay monsoon adventure.”