Jake’s Sunday Post theme this week, ‘Solid’, immediately brought to mind that old saying which I believe must be a universal idiom, “As solid as the Rock of Gibraltar.” This term is used to describe any person who is totally reliable and trustworthy, or any thing that has strength and endurance that is indestructible.

The Rock of Gibraltar, which is the Crown property of the UK, was known to the Romans as Mons Calpe. This enormous rock is 426m high and is the northern of the two ‘Pillars of Hercules’, which in ancient times, according to the Phoenicians, marked the limit to the known world.

We visited the Rock when we did a tour of Spain, Portugal, Morocco and Gibraltar, a few years ago. The charming Mediterranean town’s main street was jammed with pubs, restaurants, cafes, tiny shops, as well as a handful of famous British chain stores such as Marks & Spencers.

We had a minibus ride right to the top of the Rock, stopping en route to see the ‘Tower of Homage’, Gibraltar’s first permanent settlement, built around 711. This castle was rebuilt after the second period of Moorish occupation, in the early 14th century. 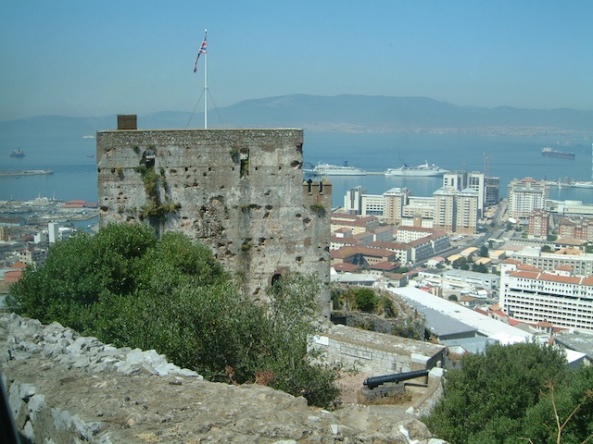 Here I am with my friend, who didn’t want to miss the photo opportunity. 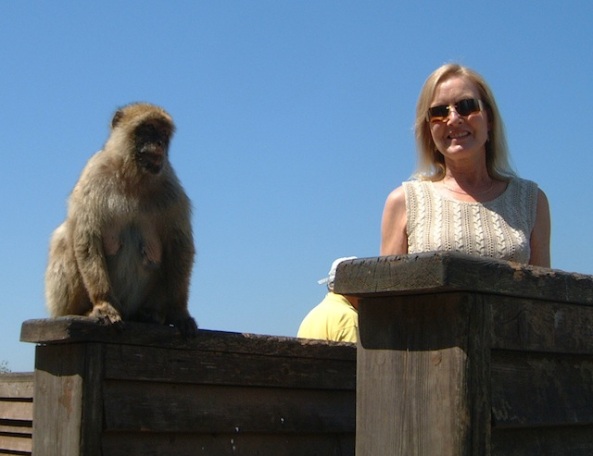 No this isn’t my travelling companion, but one of those cheeky Barbary Macaques which seemed to be everywhere. We were warned not to have any food visible, as it would be snatched, and sure enough, one of our fellow travellers was followed onto the bus, and just as she was about to enjoy her packet of chips, it was stolen right out of her hand by one of these fearless bandits.

Here is our farewell view of this massive rock, as the ferry transported us across the Straits of Gibraltar to Morocco for the next leg of our tour. Looks pretty solid to me.