Ailsa’s travel challenge this week, is ‘Leading lines’. I couldn’t for the life of me think what to post for this, other than roads, power lines or traffic jams. Then I remembered our visit to see the Terracotta Army at the Museum of Qin just outside Xian in Shaanxi Province. It was listed by UNESCO in 1987 as one of the world’s cultural heritage sites.

I had of course heard of this amazing collection of  life-size figures of warriors and horses, but I was absolutely awestruck to actually see them in real life, standing in long lines as if ready for battle. It is said that no two faces are the same, and there are over 8,000 soldiers.

There are columns of soldiers at the front, followed by war chariots at the back.

Excavations are still ongoing in the three pits in which they were discovered by local farmers in 1974. They are a form of funerary art buried with the Emperor Qin Shi Huang in 210-209 BC. They were there to protect him in his afterlife and to make sure that he had people to rule over. I’ve heard of “ruling from the grave” but this is quite ludicrous. 😉 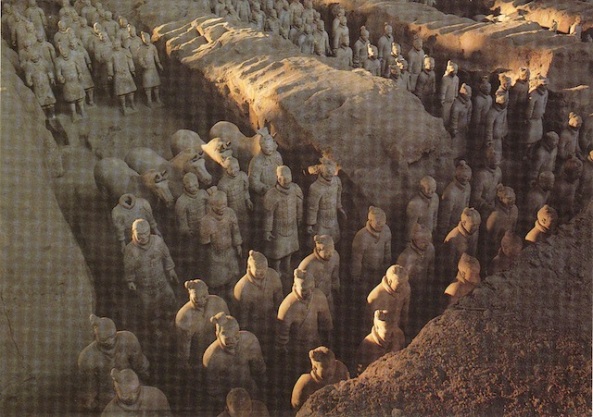 My favourite sculpture is this fabulous horse-drawn carriage, sculpted in copper, which was in a glass case in the actual museum. 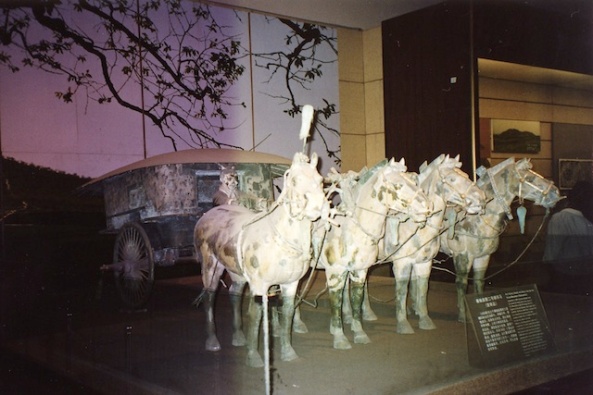 It will be years before all the lines of soldiers are excavated and cleaned up, but even now, one can see that the army is arrayed in a rectangular formation, all facing east. In the front there are three rows each with 210 warriors making up the front ranks.Behind them are marching soldiers and horse-drawn war chariots, making up the main body of the army. This is indeed a most amazing spectacle.

So there you have my leading lines of warriors with thousand of others bringing up the rear.