The weekly photo challenge is one which calls for restraint, as I have so many photos which would qualify for it. I decided to spare you though, and post just a few. 🙂

The first two are taken in Beijing, and show the urban life around the Hutongs, which are are narrow streets or alleys formed by lines of siheyuan traditional courtyard residences. Many neighbourhoods were formed by joining one siheyuan to another to form a hutong, and then joining one hutong to another. Many of these have over the years, been demolished to make way for new roads and buildings. Some of them have however, been designated as protected areas in an attempt to preserve this aspect of Chinese cultural history. We took the next two photos when we were there in 1999.

Here I am riding in style in a bicycle driven rickshaw. My mom lived in China during the war, and was carried to school every day in a rickshaw manned by what was then known as a “rickshaw coolie.”

The next photos were taken in X’ian which has developed from a sleepy rural village into a bustling urban metropolis. The usual form of transport is by bicycle, as you can see below.

Down an alleyway beyond the Drum Tower, we found the Muslim market which was a hive of activity. Even the meat and rice deliveries were done on open carts driven by cyclists who must have very strong calf muscles. 🙂

There were lots of stalls selling all manner of souvenirs etc, and at the end of the street, there is another which winds for ages and is full of food stalls, which looked to be where many of the locals gathered at mealtimes. This next photo is the bottom entrance to the market.

Here is one of the main streets in X’ian, where you will find more cars and buses.

Go down the side streets though, and  bicycles abound once again. 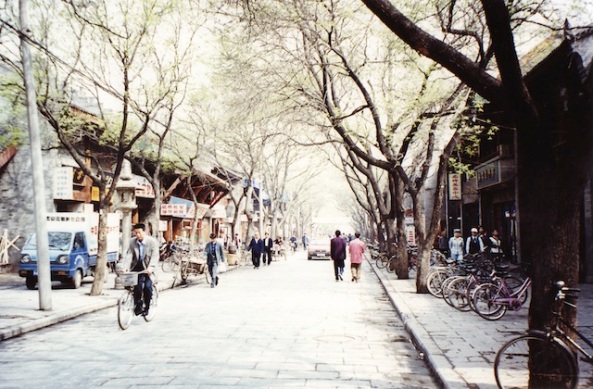 I’m sure that since our visit, X’ian has probably changed quite a lot. It is now the capital city of Shaanxi province, and I read on Wiki, that it and has 5 pillar industries: IT and hi-tech, equipment manufacturing, tourism, modern services and cultural industries, and that by the end of 2006, there were more than 48,200 industrial enterprises. I imagine that if we were to make a return visit, we’d find it very different from the way we remember it, as portrayed in these photos.