Ailsa’s travel challenge, “On display,” could be interpreted in many ways, and when we arrived at the restaurant on Friday night, I thought how these diners inside were really on display, to the passersby.

The decor inside was really lovely, with beautiful artworks displayed on the walls. 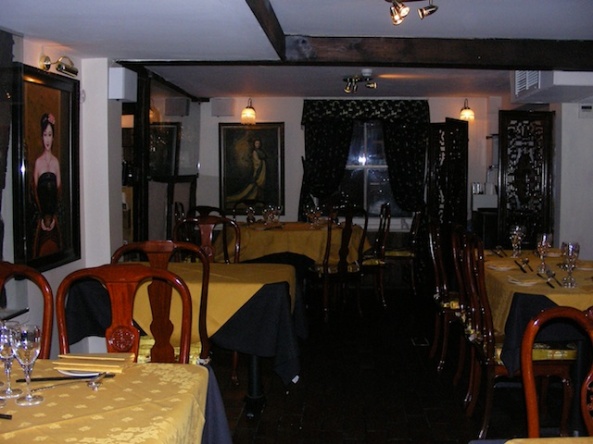 The wine we ordered, was from a local Sussex vineyard, and was extremely good.

My sister-in-law and I had a great catch-up on all our news.

The food was absolutely ‘to die for’, and when it came to dessert, the maitre d’ told us of a speciality of the house, which they called “Dragons’ Whiskers.” He explained it as banana, split in two and sandwiched with red bean paste, covered in angel hair noodles, and deep-fried, a bit like the Greek ‘Kataifi’. I wasn’t too sure about the red bean paste, but he made it sound so delicious, that we all ordered it. It  came with delicious vanilla ice cream and strawberry coulis, and every mouthful was an absolute delight.

Earlier in the evening, we had been at SiL’s house for a glass of wine and a chat. She showed us a little concertina which someone had given her. it was really just to display as an ornament, but she found that it would actually play. When she started to make really weird noises with it, Luca her gorgeous black poodle, decided to sing along. It was hilarious. 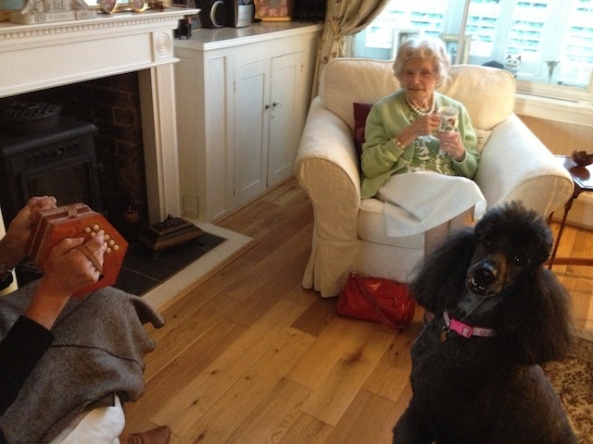 Something else we saw on display in the garden, earlier in the day, was this cute little bunny rabbit,

More family are due to arrive for lunch at any moment, so I’d better go and put the cream, raspberry and kiwi fruit topping on my cheesecake. Have a great Sunday, everyone., and don’t forget to check out other entries for the theme.

60 comments on “Diners and a bunny, on display”