Well here I am on the eve of  Thanksgiving Day, and I thought it was a good time to show my gratitude to three more of my special blogger friends who have nominated me for this very special award.

Emily of Hoof Beats and Footprints, Hope the happy hugger, and Gunta of Movin’on, have enabled me to add three more stars to my badge. 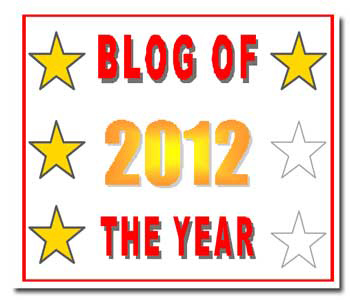 Thanks so much to you all. I feel really honoured to know that you enjoy reading my blog so much.

The ‘rules’ for this award are simple:

2 Write a blog post and tell us about the blog(s) you have chosen – there’s no minimum or maximum number of blogs required – and ‘present’ them with their award.

3 Please include a link back to this page ‘Blog of the Year 2012’ Award – http://thethoughtpalette.co.uk/our-awards/blog-of-the-year-2012-award/   and include these ‘rules’ in your post (please don’t alter the rules or the badges!)

I follow and enjoy so many blogs, but I will have to choose just a few, otherwise I’ll be sitting here all night. Here are my nominations. Please don’t feel under any obligation to accept the award, but I do hope that the nominations will tempt some of my readers to visit your blogs.  After all, that’s what these awards are all about. 🙂

Cathy of “A nomad in the land of nizwa.”

Suzanne at “A window into the woods.”

Madhu at “The urge to wander.”

LuAnn at “Paint Your Landscape.”

Rommel at “The Sophomore Slump. “

Deepali at “Detours by Deepali.”

Roly at “Comedy in Crisis.”

Tilly Budd at “The Laughing Housewife.”

Adrian at “Cornwall a Photographic Journey.”

Vladimir at “Wind Against Current.”

Frank at “A Frank Angle.”

“The Photographic Journey of Bulldog.

Elizabeth at “Mirth and Motivation.

Nia at “Photography of Nia.”

Before you go off to read all these amazing blogs, here are a few thoughts on Thanksgiving.

Not being an American myself, I was wondering how this celebration came into being, and discovered that it originated in 1621 when the 102 Pilgrims who sailed from Plymouth England, landed in the New World. After experiencing a treacherous winter when almost half of them died of disease, they met up with an American Indian named Squanto, who taught them to fish, cultivate corn and get sap from maple trees. This resulted in a successful harvest, and Governor William Bradford set up a thanksgiving feast which the Pilgrims shared with about ninety Indians. It only became a national holiday in America in 1863, when Abraham Lincoln was president. Although Thanksgiving is an American tradition, thanksgiving celebrations can be traced way back to ancient civilisations, such as the ancient Greek, Chinese, Jewish, and Celtic cultures, who at this time of the year, held festivals to give thanks to their gods for a good harvest. So it seems that giving thanks has always been considered a good thing to do. 🙂

I remember when I was  growing up in England, my Sunday School used to hold a Harvest Festival. We all had to bring fruit and vegetables as well as some non perishable goods. These were displayed on a platform which was decorated with wheat sheaves, and then all the food was distributed to the needy. I think it’s a wonderful idea, and it certainly taught me as a child not to take things for granted, to be thankful for everything I have, and also not to waste food. I’m not sure where the poor unfortunate turkey came into all of this, but it’s said that about 90 per cent of Americans eat turkey on Thanksgiving. The supermarkets have been doing a roaring trade in turkeys, stuffing, cranberry sauce and pumpkins lately. I’m sure there will be plenty to eat at the club tomorrow night, and I’m so looking forward to sharing Thanksgiving dinner with the many new friends I’ve made here.

On a more sombre note, I’m thinking that those poor turkeys have quite a rough deal towards the end of the year. In a month’s time, it will be Christmas, and then we’ll all be having them for dinner yet again. They must breathe a sigh of relief if they make it through to New Year.