Sue’s ‘Word a week challenge’ is Island, and I immediately thought of the beautiful Isle of Capri. The maintown shares the same name, and has been a resort since the period of ancient Roman civilisation. The island is a large limestone and sandstone rock, and geological and archaeological findings have proved that it was once part of mainland Italy.

We arrived by hydrofoil at the colourful port of Marina Grande.

In the latter half of the 19th century, Capri became a popular resort for European artists, writers and other celebrities. The German artist and writer, August Kopisch revived public interest in the island, when he wrote a book,”Discovery of the Blue Grotto on the Isle of Capri,” in which he described his 1826 stay on the island, and his rediscovery of the amazing ‘Blue Grotto’ (Grotta Azzurra), which is a noted sea cave on the coast of the island, which is reputed to have been the private bath of the Emperor Tiberius. Sunlight, passing through an underwater cavity and shining through the seawater, creates an amazing blue reflection that illuminates the cavern. As we marvelled at the sight, the boatmen were all singing that old Italian song, “Volare,” and of course we  joined in.  The words of the song are “Nel blu dipinto di blu” (In the blue, painted blue), most appropriate. 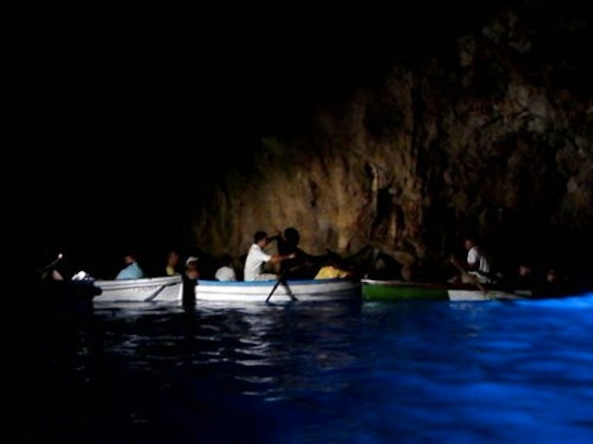 On the way over to the grotto, we saw the ancient ruins of a villa built by Tiberius Caesar, which now stands right at the edge of the water. I read that this notorious emperor was in the habit of having people who displeased him, thrown from the cliffs onto the rocks beneath. What a nice guy!

There are beautiful villas built into the hillsides, mostly owned by rich and famous people such as Sophia Loren and  Giorgio Armani.

This white one on the right, once belonged to Gianni Versace, and was inherited by his sister Donatella. 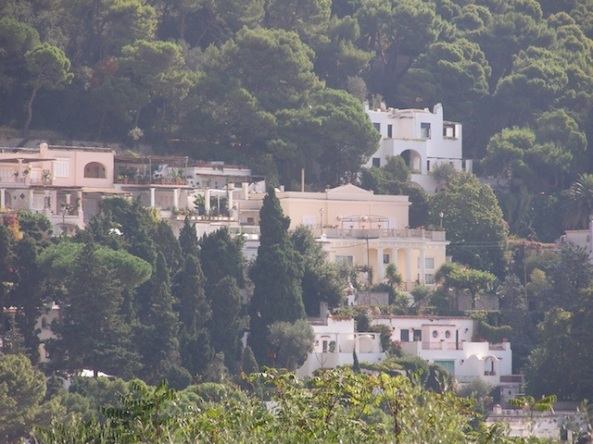 There are gorgeous hotels, and at ‘The Capri Palace’ up the hill in Anacapri, we even had our own private terrace and garden. I would have loved to stay for much longer than two nights. 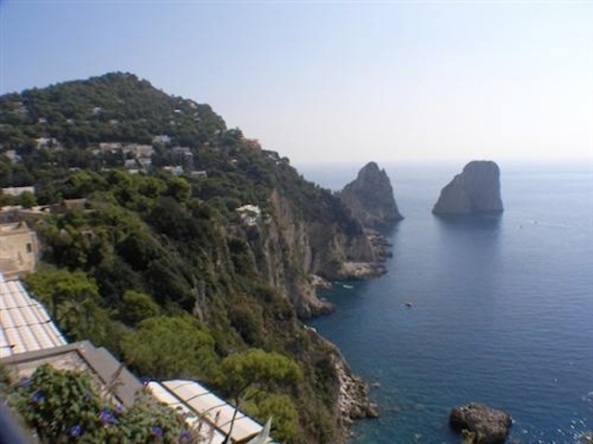 Shopping is a favourite pastime with all the tourists, but the ‘Via Camerelle’, is not for the penny-pinching, and is lined with the most expensive designer clothing boutiques, perfume shops and jewellers. 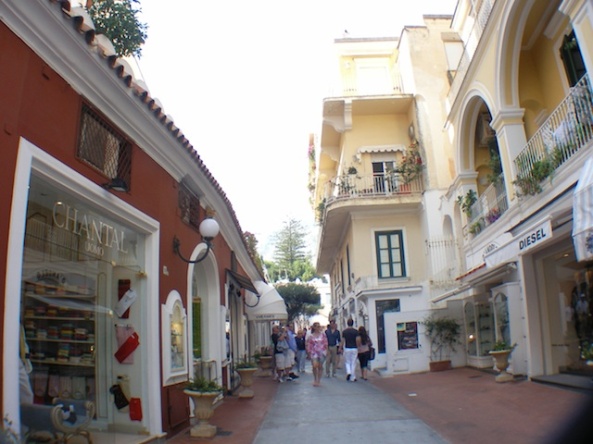 This guy’s T-shirt really made me smile. 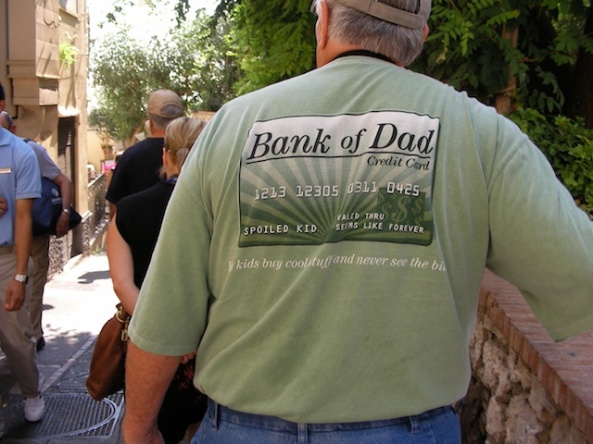 The taxis are these huge, opened topped, and meticulously clean, and the drivers negotiate the extremely narrow, steep and winding roads at great speed. They were so narrow that I thought they were ‘one way’, until we met and squeezed past an oncoming one, with only room for another coat of paint between us.

All too soon it was time to leave and as we looked back at this magical place, the sun was beginning its daily ascent,

and we were on our way back across the bay and past the giant sea stacks to Naples.

126 comments on “Word a week: The Beautiful Isle of Capri.”