My lovely family returned to the cold of New Jersey, yesterday. We had such a great time together, and it was so special to see the three children again and watch them having fun. Much of the time was spent playing in the pool at the club, and Sienna went to the golf and tennis workshops, which were organised for the children. There was live music and also games for the children by the pool. Sienna came joint first in the hula hoop competition, and got ‘$100’ bill, which bought her an ice cream at the restaurant. 🙂 I was so impressed at how she just kept that hula going, even when she had to jump, wave her arms in the air and then go down on one knee a few times. What a granny’s girl! The guy organising the games realised that these two girls could go on ‘ad infinitum’, so decided to award them both. Sienna is the little one on the left.

Three-year-old Taylor was more interested in hogging the microphone, and was given her chance to make announcements, which she did with great gusto. 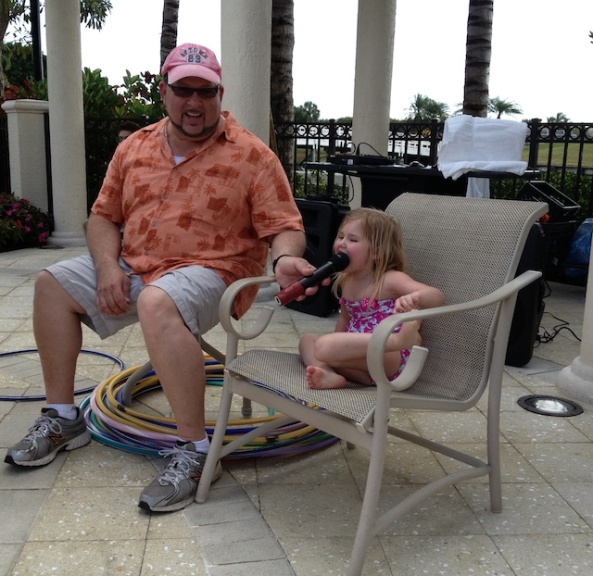 Here are some pics of the fun times, this past week. Just click on any photo to get a slide show.

Riding the bumper cars at Disney

Having fun in the giant water lily

Fun with dad and pool noodles

Fun at the pool

Dad’s having a well earned snooze

This morning, breakfast for two instead of seven, was a very quiet affair, except for the sound of the washing machine working overtime. Hubby and I are now off to the gym, before coming home to tackle the myriads of tiny, sticky hand prints on the glass doors and mirrors. 🙂

Wishing you all a great weekend.