Last night I slept like the dead, and woke up to brilliant sunshine streaming through the curtains. I jumped out of bed to look out of the window, and was greeted by beautiful blue sky for a change. Fine weather really does lift the spirits, doesn’t it? Yesterday when we arrived home, there was so much to do, and not just the unpacking of our cases. There were piles of dead bodies on the tiles in the dining room! Well, they were very tiny dead bodies, but they needed vacuuming up before I could go to bed. I would not sleep well, knowing there were hundreds of dead ants on the floor downstairs. 🙂

Today has been really busy, with washing and shopping for food. Of course the cupboards and fridge were like ‘Old Mother Hubbard’s’……..absolutely bare. There was not a single skerrick of food to be found. Then there was the gym membership to sort out, and whilst we were there, we decided we may as well  have a good workout. I’ll probably ache all over tomorrow, but too bad, because we’re both going to ‘Cruel Neil’s’ shape class at 9 am. I remember his classes from a couple of years ago. He’s a hard taskmaster, and I could hardly walk down the stairs afterwards. It was nice to go to a gym with lots of young people, instead of the one at our club in Florida, where we’re about the youngest.  I’m sure some of the Florida gymmers are well into their eighties, but you have to admire their energy, even if they don’t display impressive muscle tone.

It was  really windy today, and these kite surfers were making the most of it. 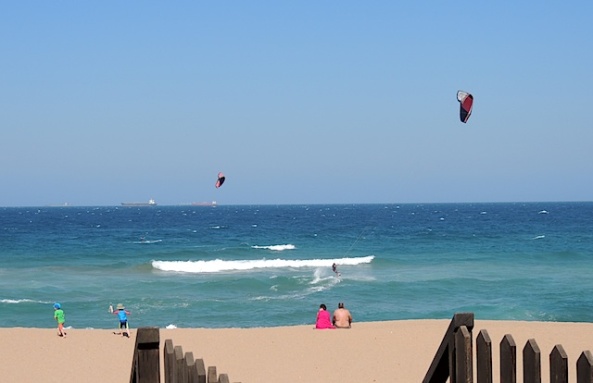 The beach is looking stunning, and we may have to go and sit on it tomorrow. It’s been a while.

70 comments on “A windy day in Umhlanga”