Ailsa of ‘Where’s my back pack’ fame, has given us a new travel theme.  Time is something I’m seriously short of at the moment. Since I got back to my home in South Africa, after six months away, I seem to have been rushing madly to get things done. One of the most important things was driving up to see my dear mom and have lunch with her yesterday. She was overjoyed to see me of course, and we had a lot of hugs, kisses and news to catch up on. 🙂

Some of you may know that I play the piano, and I phoned the local mall to say that I was back. The pianist who was standing in for me, hasn’t played for quite a while and they have no-one at the moment, so off I go in a few minutes to entertain the Sunday shoppers for two hours. This necessitated a bit of practice time this morning, which went quite well. It’s a bit like riding a bicycle; you never forget, and as I sat down, I was pleasantly surprised to find that it sounded not too bad, so I’m quite confident to go and practise some more on the general public.  😉

I thought I’d show you our ancient clock which was presented to hubby’s grandfather in 1894. It was for his service as a Methodist minister at a church in Birmingham, England. The case is made of slate, and a clock maker told us that the mechanism is much older than 1894, so we have a real antique. It has a lovely chime too, and keeps very good time. 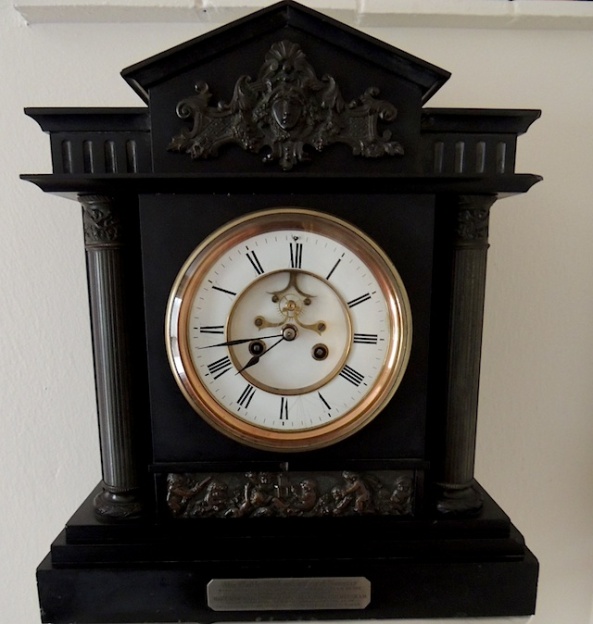 Here is a close-up of the metal plaque on the front. The family has no idea where the ‘pair of bronzes’ went to, but my father-in-law thought that they were maybe made of pewter, not bronze, and just fell apart over the years.

So this is our family heirloom, which weighs about 20 kgs, and was brought over from Ireland in our hand luggage. I well remember hubby carrying this and trying to make out that it weighed almost nothing, so that it wouldn’t have to go as checked baggage. 😉

Now I’m rushing off to do my piano stint. I think I’ll include those lovely old songs, Jim Croce’s “Time in a Bottle” and  “As Time Goes By,” from Casablanca, in keeping with the theme.