“And because no matter who you are, if you believe in yourself and your dream, New York will always be the place for you.” ~ Michael Bloomberg, 108th mayor of NYC.

Jake’s theme this week is ‘City’, and I immediately thought of one of the most famous cities in the world. I first visited New York in 1996, and fell in love with it. It certainly did feel like a big apple, just waiting for me to take a bite. There is so much to do and see, and everywhere you look, there are people busily scurrying to and fro about their business, and tourists just like ourselves, map in hand, just standing getting their bearings before the next onslaught on the city’s attractions.
One of the first things we did, was to take the ferry across to Liberty Island, to see the grand old lady who has greeted visitors and kept watch over the city since 1924. 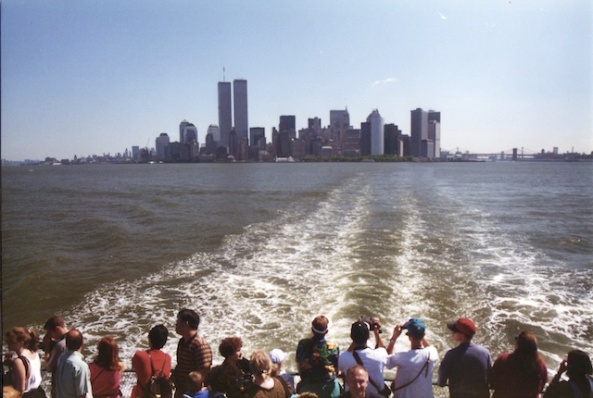 We just had to go right up inside this iconic symbol. It was so much bigger than I’d ever imagined, and we climbed right up into the crown. I lost count of how many steps it was, but I read that there are 354 steps and 22 storeys. It was quite some climb, and the stairs are so narrow as you pass people on their way down. 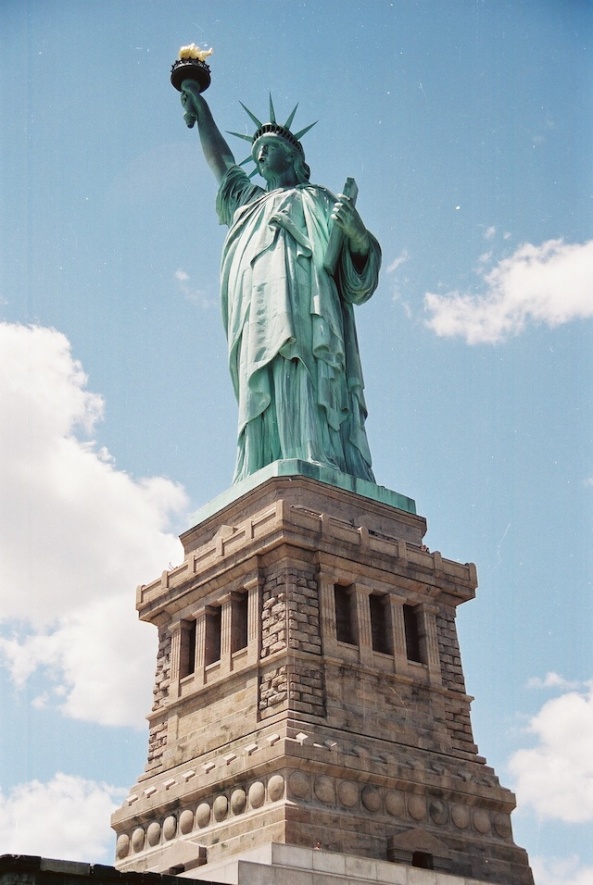 We marvelled at the lovely architecture of the New York Stock Exchange. I’d never seen a yellow cab before, except in the movies, and there were so many of them, everywhere. 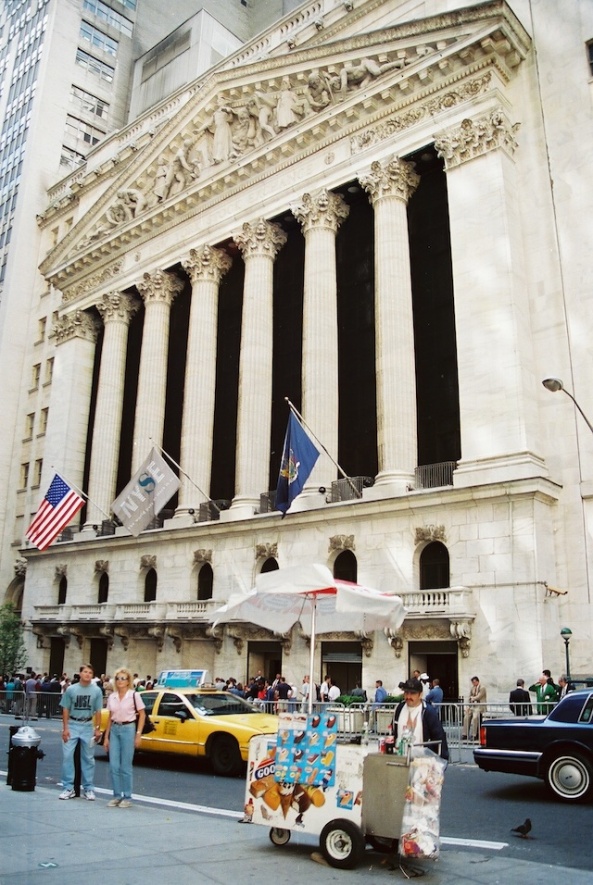 The famous old buildings down near Wall Street, were a sight to behold.

It was difficult to get far enough away to get a good pic of the Empire State building, without standing the chance of getting run over by a cab.

Central Park, which had only been a name to me, now became a reality, with delightful little surprises around every corner.

The Disney Store was a treasure trove of souvenirs and we spent a good hour in there deciding what to buy. 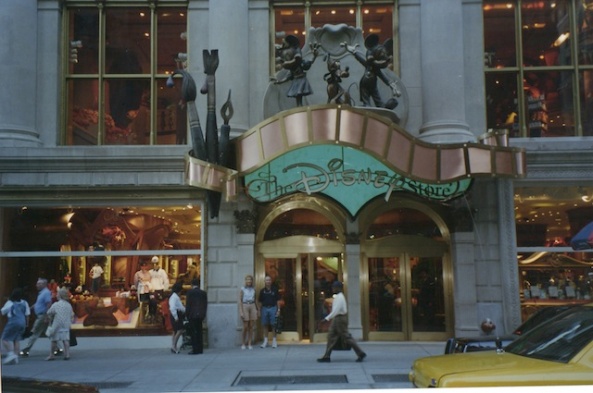 The Rockefeller Centre was everything I’d ever imagined and more, and the beautiful golden maquette of Prometheus, one of the most famous statues in the world, did not disappoint. 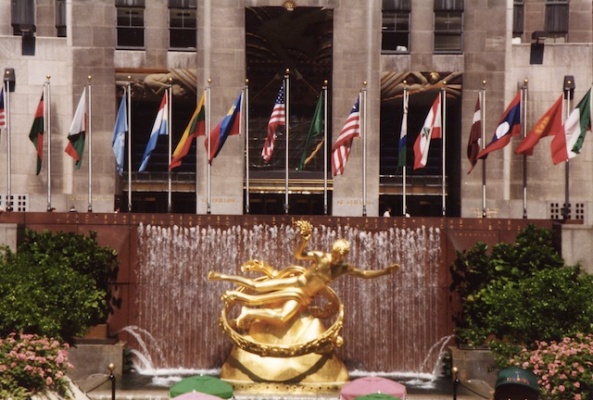 Everything seemed bigger and better in America, especially our limo ride to the airport.

On a subsequent visit in June 2001, we took the ferry across from Hoboken to Lower Manhattan. (Our son had emigrated from South Africa in 2000, and was now working in the city). 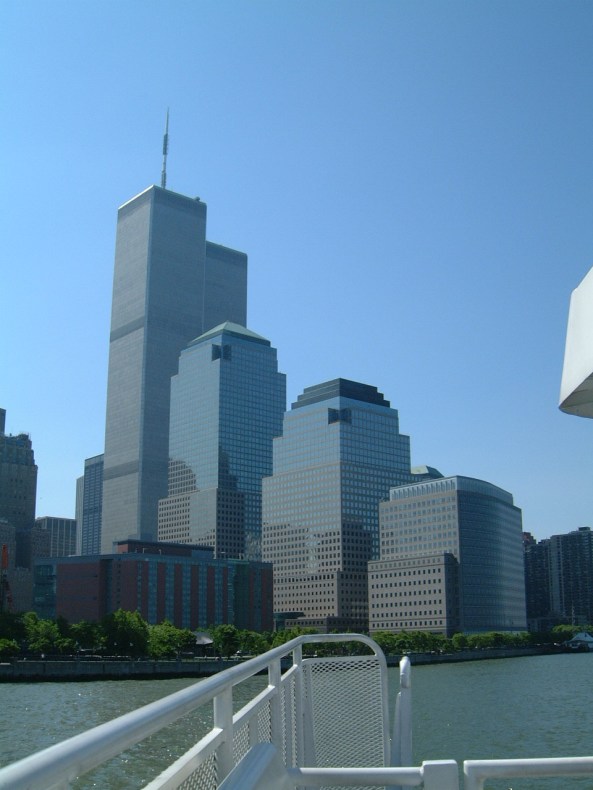 We rode the elevator to the top of the World Trade Centre. It was such a beautiful morning as we sat way up there, enjoying our breakfast of hot coffee and bagels loaded with Philly cheese.

The view over ‘The Big Apple’ was truly breathtaking.

As I stood there in the morning sunshine, with not a breath of wind, I couldn’t ever have imagined that in less than three months time, this wonderful structure would be raised to the ground. 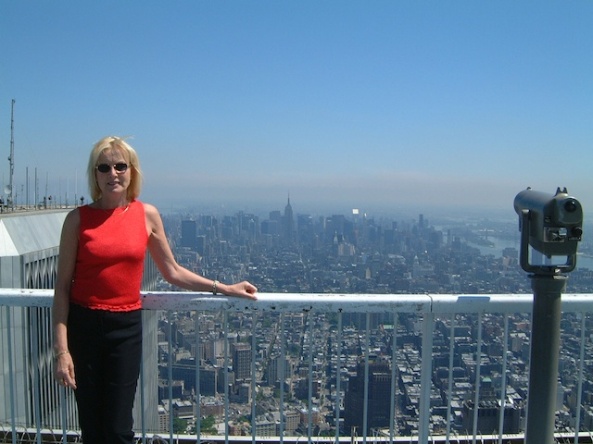 In May 2008, we took both our mothers over to see our son and family, and we all went into the city. Here is hubby’s mom who was then only 95-years-old, standing in the middle of Times Square. Both our mom’s had never been to America before, and they had the time of their lives, walking their legs off all around the city, and shopping up a storm in Macy’s. 🙂

Last year in May, we took a cruise out of New York, and got this shot from the ship, looking straight up 42nd Street where most of the theatres are situated.

New York is truly the most amazing city; it’s not beautiful, shiny  and clean; far from it, but it throbs with a vibrancy that is difficult to describe, and has an allure which is hard to resist. You really have to go there and experience it for yourself.