As we sailed serenely down the Rhine, I was reminded of that 1938 song by Hoagy Carmichael, ‘Thanks for the memory’. Whenever I’ve heard it sung, I’ve wondered about those “Castles on the Rhine” which come after “Candlelight and wine,” in the lyrics. Well yesterday my curiosity was finally assuaged, as we passed castle after castle, seemingly without end, until we arrived in Braubach. A few of you have asked me to please show you some views from our cruise ship, so here goes. You’ll probably be as “castled out” by the end as I was. 🙂

As we neared Braubach, we caught sight of the beautiful Marksburg Castle, the only hill castle along the Rhine which has never been destroyed, making it the most original castle in the entire valley of the Loreley. We were able to visit it later, but that’s a post for another day. 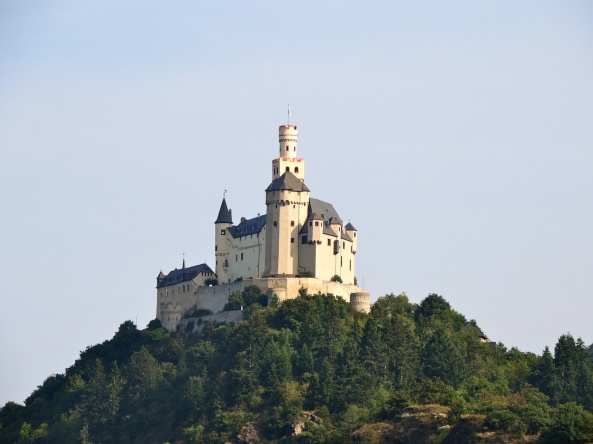 Today we are in Cologne, and I’ve been out most of the day looking at the magnificent cathedral. Tonight we have a classical music evening after dinner, in sharp contrast to last night’s entertainment, which ended up with our young Program Director doing a very convincing impersonation of Elvis singing ‘All Shook Up’. His white suit, dark shades and hip gyrations were right on the nail.

Have a great weekend everyone. I have only one full day of our cruise left and it’s back to England on Sunday, and on to Florida on Tuesday. It’s all go! I’m rather looking forward to being able to relax for a change. Being on holiday is so exhausting. 🙂