Sue of  ‘A Word in Your Ear’ has given us a challenge to show some orange photos. Orange isn’t one of my favourite colours, probably because I don’t look good in it, but I was surprised to find quite a few oranges in my photo library.

This Vervet monkey just up the road, knows that oranges are really good for him. 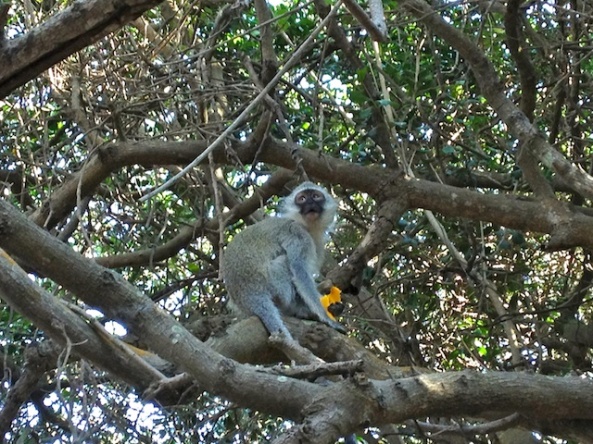 In Florida, I spotted enough oranges to fill your vitamin C needs for weeks.

Then of course, there are always many pumpkins knocking around at Halloween,

as well as some other scary orange stuff which I encountered in New Jersey. 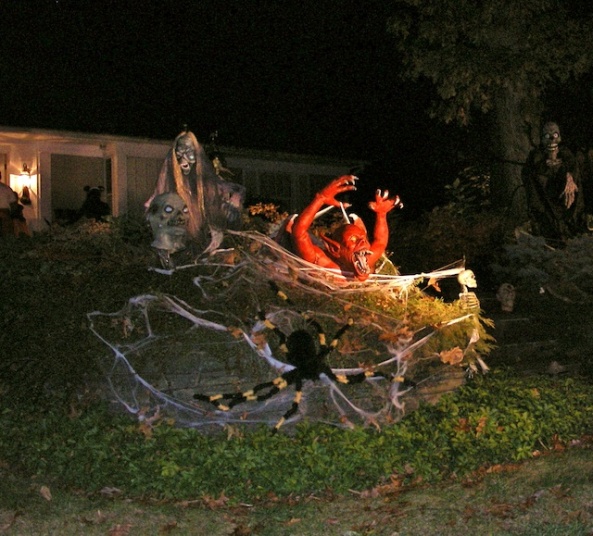 Let’s rather go to Jamaica and dine on some delicious lobster,

or would you prefer a slice of Ecuadorian Guinea Pig? I’m pretty sure you’re so horrified that you might have missed the orange bricks. 🙂

Maybe you’d prefer to skip lunch and use your money to buy a lovely piece of hand-woven orange fabric.

Bangkok also seems to favour the colour orange for its temples and shrines,

as well as boat trims.

At the end of the day, I suppose I’ll just have to admit that orange isn’t a bad colour after all. 🙂

Good morning everyone. Just in case you hadn’t noticed, tonight is Halloween. I was just watching CNN news, and Mayor Bloomberg has announced that the Halloween parade in New York may be rescheduled for next week, as the city is in quite a mess at the moment after Hurricane Sandy created absolute havoc there.

Have you ever wondered  how pumpkins came to be associated with this festival? I was interested to see that for the past week, one of the local churches just down the road from where we live, have been holding a pumpkin sale in their car park. Most Christians these days regard Halloween as having no negative significance to their beliefs, although yesterday, hubby got an e-mail from an overly pious acquaintance in South Africa, suggesting that maybe the hurricane was God’s way of showing his disapproval of the fact that Halloween is celebrated here in such a big way. 😆 What a ridiculous suggestion! The e-mail was deleted. It doesn’t deserve to be dignified with a reply……. of any sort.

Halloween is just a fun festival, mainly for the kids to dress up and go round the houses getting candy from the neighbours. I’ve noticed in the stores here, that the shelves which were full of Halloween costumes, scary masks and treat-baskets, are looking very depleted. It’s a really big thing here, much more so than in South Africa. There are pumpkins just about everywhere you look.

Halloween was originally the Festival of Samhain (pronounced Sow-wen), the holiest day of the year for the ancient Celts, who lived long before recorded history. This celebration was held to honour the souls of the dead, who it was believed were at this time, able to mingle with the living before they travelled into the ‘otherworld’. At the end of summer, the Celts also gave thanks for the harvest, and the 31st October marked the start of their New Year. They only had two seasons, summer and winter. When Ireland was converted to Christianity, the priests allowed the Irish to continue to celebrate their festival for a few hundred years, before the Catholic church tried unsuccessfully to ban it. The Catholics demonised everything about the old religions, which is why even today, Halloween is often considered by some people to be evil.

When many of the Irish migrated to America during the potato famine, which killed over a million people between 1845 and 1851 in Ireland, they brought their festival with them. Americans embraced it, and it has gradually become the fun occasion that it is today, with children going around the neighbourhood, trick or treating. Costumes depicting witches, ghosts and skeletons are the most popular. Children do seem to love the most gruesome, don’t they? 😯

It has long been tradition to carve out scary faces, first on turnips, and then more recently, on pumpkins, as they are bigger and much easier to carve. The Irish used to place candles and lighted embers inside these, to keep “Stingy Jack” away from their homes. This is why they were called Jack O’Lanterns.”

There is a legend which says that hundreds of years ago, there lived in Ireland a very clever but  lazy and miserable drunkard by the name of ‘Stingy Jack’. He never did any work, and spent his days drinking beer and playing mean tricks on everyone, including his poor old mother. One Halloween, it came time for Jack to die, and the devil arrived to take his soul, but Jack being so clever, managed to trick him, and gained an extra two years of life. The third year, Jack did actually die, and because he was so bad, he was of course refused entrance into Heaven. The devil saw his chance of revenge for being tricked by Jack, and refused to allow him into Hell either. “Where can I go?” cried Jack. He couldn’t see anything in the darkness between Heaven and Hell, so the Devil threw him an ember from the flames of Hell, which Jack put inside a hollowed-out turnip, which he conveniently happened to have with him. 😉 He uses this lantern to light his path as he wanders around in the darkness for all eternity.

So now you know, where the pumpkins fit in with Halloween, and I certainly hope you’ve bought candy, just in case you get a visit from those mischievous trick-or-treaters, or you might just end up with egg splattered all over your awning, as we did one year when we weren’t home to answer their call.

Have your candy ready tonight, and have a great Halloween.

(All pics from Google)