This week, Ailsa’s Travel Theme is ‘Stones’, so I decided to show you a few of the impressive stones I saw in England during my August visit.

I’m pretty sure that the best known collection of stones in England, is Stonehenge in the county of Wiltshire. It is for many people, the one place that represents Britain’s prehistory. This massive stone circle stands on Salisbury Plain, and its lintel-topped Sarsen stones are thought to be over 5,000 years old. The tallest of these stones is 22 feet high, with another 8 feet lying underground. It was constructed over several hundred years, with stones being put up, taken down and moved around, until it finally became the shape that we see today. Its meaning and purpose are a source of great fascination, and this World Heritage site attracts over 900,000 visitors a year. It doesn’t look so big here, but just look at the midget people around it.

Another mammoth stone on the same site, is this heel-stone, which weighs 35 tons. The nearest source for these stones is the Marlborough Downs which is about 30 kms away. Some of the biggest ones weigh up to 45 tons, and it has been surmised that they were probably transported on sledges, but it’s still mind-boggling to me to imagine the manpower required to shift and then erect these humongous lumps of stone. Well. anything the ancient Egyptians could do, I guess the Brits had already done. 🙂 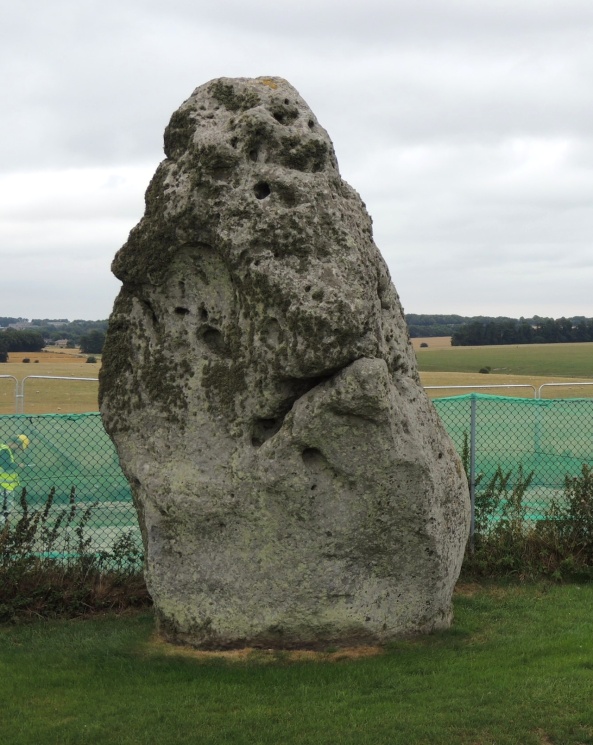 As we entered Bodmin Moor in Cornwall, we saw this stone at the side of the road next to Colliford Lake. It’s probably an ancient way-marker, or boundary stone.

Another interesting collection of stones is the Neolithic Trethevy Quoit, in the middle of a field next to a small housing estate on the moor. It’s made up of large standing stones which support a heavy capstone. These quoits, as they are called in Cornwall, are thought to be ancient burial mounds. 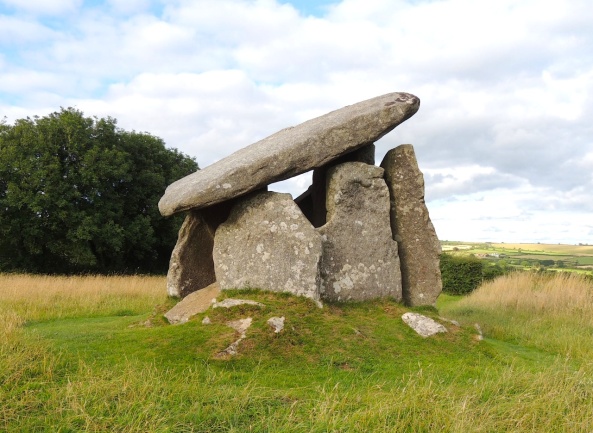 You can get more of an idea of its size when you compare it to the houses nearby.

Bodmin Moor, is literally littered with stones, and The Hurlers, a unique Bronze Age monument, consists of a set of three standing stone circles. Local legend has it that some of the local men were on the Sabbath, playing a Cornish ball game known as hurling, and were turned into stone as a divine punishment, I suppose much the same as Lot’s wife in the Bible was turned into a pillar of salt. I looked to see if there was a stone ball lying around to confirm this legend, but couldn’t find one. We did notice that this is a favourite place for local dog walkers, so you really have to watch your step. 🙂

Here is part of an abandoned tin mine, also built of stone, and in the foreground are more of these ancient stones. 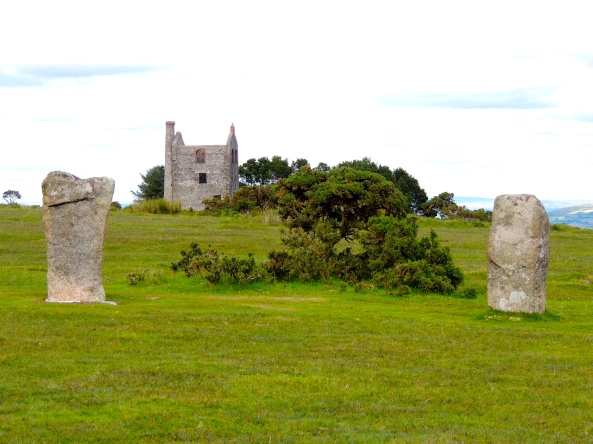 Everywhere we went, we saw beautiful stone structures, and even though now in ruins, they’re still really impressive. 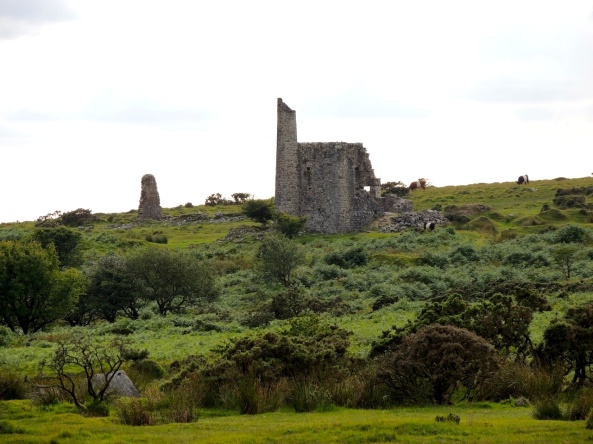 The cliff path down to Wheal Cotes tin mine, which lies between Porthtowan and St Agnes, is supported with many stones tightly packed together.

Here is some stone detail of the mine chimney,

and here is the shaft pump-house, which is preserved and maintained in wonderful condition, by the National Trust.

I hope you’ve enjoyed seeing some of the old stones which I saw in England. If you want to get even more stoned, just visit Ailsa’s post.