Ailsa of “Where’s my back pack” fame, has posted a new travel theme. This week it’s ‘Art’, and as I have an artist in my family, I thought I’d take the opportunity to show you some of her work. Walking into my sister’s house, one is confronted with paintings absolutely everywhere. Even her kitchen looks like an art gallery.

Lately she’s sold quite a few, and others are out on consignment, so the walls aren’t quite as cluttered. She has always been in the arts, having been an opera singer, model and actress in her younger years, but never even considered trying her hand at drawing or painting.It was only seven years ago that one of her friends suggested that instead of just being two bored housewives, they should go for art classes. I recall how excited she was when she showed us that she could draw something very simple, and she became really enthused. After a few weeks, the art teacher closed her little school, and my sister and her friend had to find a new teacher. Mark Phillips really brought out her hidden talent, and we were most impressed,when not even two years later, she won second prize in the Nivea Art Competition.

She loves the African bush and enjoys painting the animals found there, especially leopards. 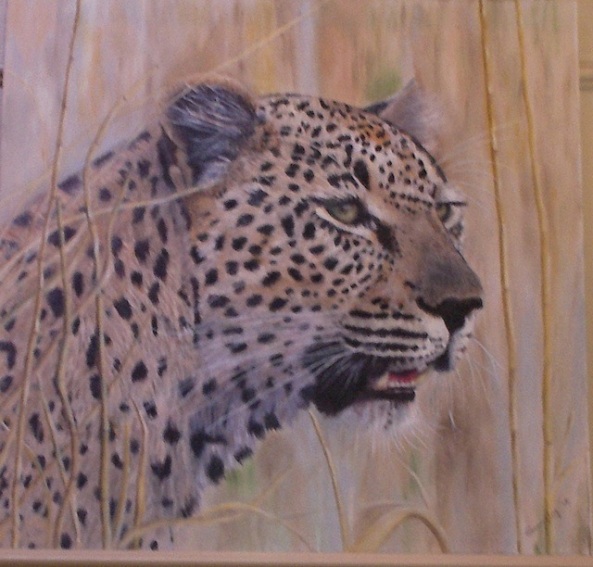 She also has a great talent for painting portraits of Southern African people portraying them in very interesting ways. 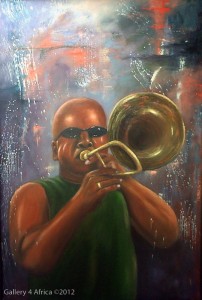 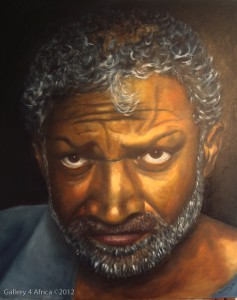 A couple of years ago, she was commissioned to do this painting of “The Three Faces Of  Mandela,” for the re-opening of Mandela House in Soweto; one of her proudest moments. 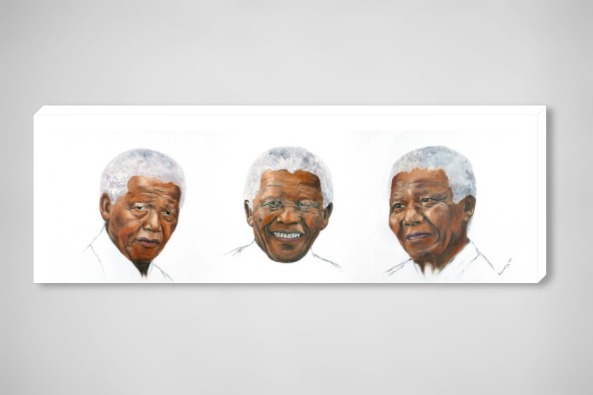 Whenever we go to visit, she ushers me into her studio to see the latest work in progress. This week, it was a leopard drinking at a waterhole, from an original photo by Mark McWilliams.

and something entirely new; this shell which she’s just started. 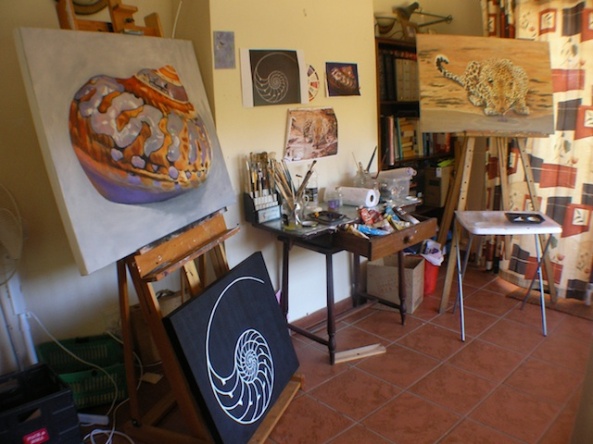 Her assortment of brushes always fascinates me. I wouldn’t know which to use for what. 😉 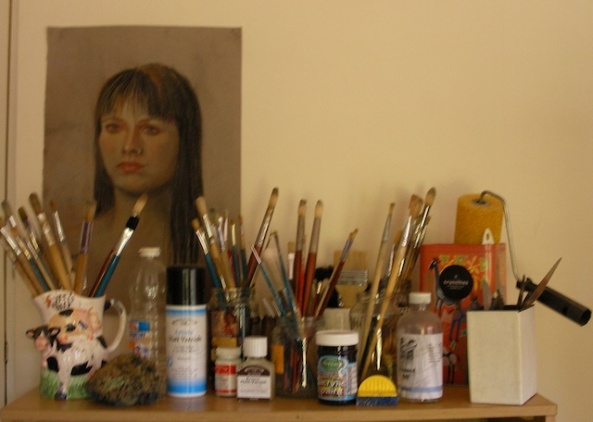 Looking around the walls of her studio, you would be sure to notice this framed newspaper pic from the 70’s, when in a moment of zany madness, and in need of a bit more income, she posed for a well known British tabloid. With this, she earned the dubious reputation of becoming the D’Oyly Carte’s one and only ‘Page Three Girl’. She didn’t tell our parents until some years later. 😉

Freddy Lloyd O.B.E. who was the General Manager at the time, summoned her to his office, and she thought that he was going to give her notice for bringing the opera company into disrepute. Fortunately he had a great sense of humour, and merely suggested that they might find a way of interpolating her scanty outfit into the last night of the London season. Unfortunately the idea was dropped. 😉

After my sister had been painting for a while, she discovered that our great, great uncle was non other than Jan Toorop, the first Dutch Symbolist Impressionist and Art Nouveau Painter, which most probably explains why she has such artistic talent.  It might have just lain dormant and undiscovered, had she not taken that first step. I wonder how many of us have hidden artistic talents which we’ll never use.

If you’d like to see more of her paintings, you can go here.