Whilst on a stopover in Singapore a few years ago, we did the ‘Hop on, Hop off’ bus tour to take in some of the city’s sites. This is a marvellous way to see the rich ethnic, cultural and historical heritage of the city. I was very excited to see ‘Raffles’ one of the world’s most famous hotels. This hotel, built in 1887 was the first modern building with electricity in Singapore. The hotel survived the second World War, and was used as a transit camp for prisoners of war. It was declared a national monument in 1987, and in 1989, was renovated at a cost of S$160 million. We had tried to book into Raffles for the weekend, but it was fully booked up for an international conference, but I would love stay there if we go back again. It’s such a beautiful building, and those windows are lovely, aren’t they?

Along the streets of China Town, Kampong Glam and Little India, there are quaint ‘shop houses’. We saw this beautifully renovated one, overshadowed by the massive high-rise apartment block behind it. What a contrast in window styles for sure. The one on the right of it was still being worked on, hence the skip outside.

Singapore is mix of old and new, but one thing’s for certain, there are so many windows to be seen. This is the Elizabeth Hotel on Orchard Road, where we did manage to get a booking.

As I was doing this post, it occurred to me  that window cleaning must be a really dangerous business here, and I was right. I read that Singapore has recently tightened the rules on window cleaning, after nine maids fell to their deaths this year from high-rise apartments. The Manpower Ministry said that seven of these deaths were due to dangerous window cleaning or hanging of laundry.

One maid was fortunate enough to be rescued as she fell from her employer’s 12th floor apartment window. 😯 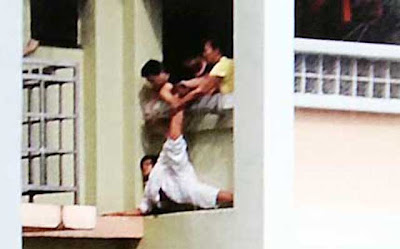 We just had to take this next photo because of the name, even though the man after whom it’s named, is no relation.  The name “Shaw” pops up all over the place in this city, as Chinese born Runme Shaw is greatly revered as a great philanthropist and contributor to the movie industry in Southeast Asia.

This post is in answer to Sandra Conner’s “Thursday’s Windows” challenge, week 9. Why not pop over to her blog and join in the windows challenge every week?